Myanmar's military declared a state of emergency after arresting the country's leader Aung San Suu Kyi and several of her allies in an early morning raid.

The army declared a state of emergency for one year, accusing authorities of failing to resolve allegations of fraud in November's election.

World powers, including the United States, condemned the coup and called for elected leaders to be released. Myanmar TV: 'Governance and jurisdiction is handed over'

Soldiers have been deployed in the capital, Yangon, and other other major cities.

Suu Kyi's party, the National League for Democracy, which won 83% of the vote two months ago, released a statement in her name.

"The actions of the military are actions to put the country back under a dictatorship," the statement quoted her as saying.

"I urge people not to accept this, to respond and wholeheartedly to protest against the coup by the military."

Tensions have been running high between the civilian government and army officials since November.

Military-backed opposition parties had demanded a rerun of the election.

Myanmar, formerly known as Burma, was ruled by the military for almost five decades until democratic reforms began in 2011.

The Reuters news agency reported that mobile internet data connections and some phone services have been disrupted.

State broadcaster MRTV said its radio and television operations were off air due to technical problems.

"Due to current communication difficulties we'd like to respectfully inform you that the regular programmes of MRTV and Myanmar Radio cannot be broadcast," the company said on Facebook.

Romain Caillaud, an associate fellow with the Myanmar Studies Program at the Institute of Southeast Asian Studies in Singapore, told DW that the military's actions overnight marked "a huge setback" 10 years after the start of the transition to democracy.

"The consequences will be dire," he said. "This is a different world from 1988, with globalization, social media, COVID-19, a new US administration, and China's infrastructure ambition. Backlash against the Tatmadaw will be intense," he added, referring to the army by its Burmese name.

US, UN hit out at military coup

The White House said Washington "opposes any attempt to alter the outcome of recent elections or impede Myanmar's democratic transition."

The US is "alarmed by reports that the Burmese military has taken steps to undermine the country's democratic transition,” White House spokeswoman Jen Psaki said, using the country's former name.

US Secretary of State Antony Blinken called on the army to "reverse these actions immediately."

A spokesman for UN Secretary-General Antonio Guterres called the developments "a serious to democratic reforms in Myanmar."

Australia urged Myanmar's military to release all the detained leaders, adding that the army was "once again seeking to seize control."

Human Rights Watch said the coup was "a real disaster for human rights and democracy in Myanmar."

"What we've seen is an election ... essentially torn up over electoral fraud allegations that have not been proved," the NGO's deputy Asia director Phil Robertson told DW.

"People are not prepared to go back to military rule. And I think that there's going to be a strong reaction from the international community to really put Myanmar back into pariah status, including facing economic sanctions."

The plight of the Rohingya in Myanmar

Who is Aung San Suu Kyi?

Suu Kyi played a key role in the 1988 protests against the military junta, spending nearly a total of 15 years under house arrest in the period from 1989 to 2010.

She is the daughter of General Aung San, who fought for independence from British colonial rule.

The Nobel laureate was once seen as a human rights champion on the international stage.

She won the Nobel Peace Prize in 1991, with the jury hailing her as "an outstanding example of the power of powerless."

But her reputation has been overshadowed by the country's treatment of its mostly Muslim Rohingya minority. 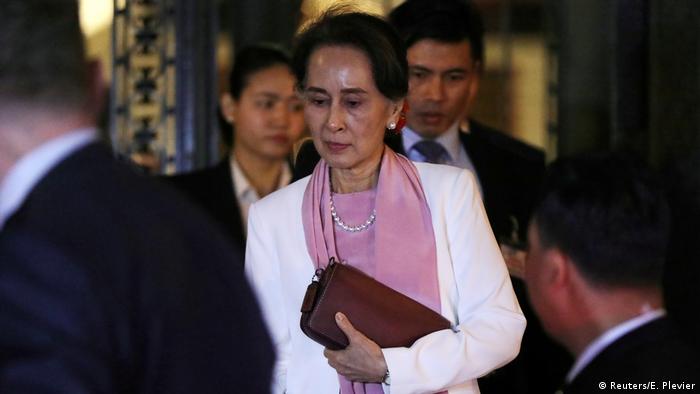 In 2017 hundreds of thousands of Rohingya fled to neighbouring Bangladesh due to a military crackdown after a series of deadly attacks on police stations in the state of Rakhine.

Her former supporters say she turned a blind eye to rape, murder and possible genocide by refusing to condemn the military or acknowledge accounts of atrocities.